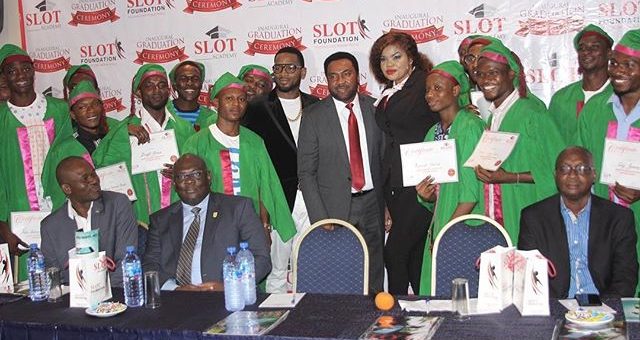 JUST the way Nigeria drifted away from agriculture due to abundance of crude oil resources and currently may have to pay the price of a dwindling economy, it could also be the same with entrepreneurship in the country as Nigerian youths are rather finding favour in politics and entertainment.

However, Managing Director of Slot systems, Mr Nnamdi Ezeigbo, has made an intervention with the institution of Slot Foundations, which in turn saw the birth of Slot Academy. Recently, the Academy graduated over 40 students from the Lagos State Vocational Educational Board 2016 Edition of the Students Industrial Work Experience Scheme (SIWES) in Lagos. Speaking at the inauguration, Ezeigbo who is also the Chairman, Slot Foundation said the aim of the academy w as to provide technical skills and creating jobs for Nigerians.

He recalled the experience he had with a group of Nigerian youths which planted the idea of Corporate Social Responsibility in his mind: “Sometime last year, I was with a certain group of young Nigerian children. In the course of interaction with them, I asked who inspires them or who they would like to model their lives after; but their answers shocked me.

They mentioned popular musicians, movie actors, footballers, Politicians and just one popular Enterpreneur. At that point, I began to wonder why only one Enterpreneur; could it be that they are not popular, not adding to the society or not progressive enough to inspire these children. But I also realized that there was need to situate entrepreneurs in the minds of these young ones for them to see need to live after them.

“If youths of today are looking up to musicians, politicians, movie actors and footballers who is going to create products and services?. Who is going to create the next generation of entrepreneurs?. That is why we come up with slot foundation. For the foundation to achieve its aim, we established the Slot Academy. We need to reduce the social cost; to create the technicians, engineers and creators of tomorrow’s products and services.

The aim is to arrest young Nigerians that will grow and sustain the entrepreneurial environment. I believe in knowledge based economy and the only time we can achieve that is when entrepreneurs become social responsible entrepreneurs” he added Brand Ambassador of Slot Mr Daniel Oyabanji, popularly known as D’Banj also admonished the graduands to hold firm what the academy has bequeathed on them. He said: “10 years ago, I was roaming the streets of computer village looking for how to sell my kokomobile.

I met Nnamdi and the wife 7 years after and it has never been the same experience. Had I met them earlier, I would have been bigger than I am now. So hold the talent the Academy has given you so tight, it might be your meal ticket tomorrow” said him.